The molecular process of electron bifurcation (EB) couples the endergonic 1-electron-reduction of a low-potential acceptor by two-electron redox compounds such as flavins or quinones to the exergonic 1-electron-transfer involving the other electron towards a relatively high-potential acceptor molecule. This mechanism represents one of the fundamental principles of free energy conversion in bioenergetics whose basic functional principles still aren’t fully understood (10.3389/fmicb.2018.01357).

Our group has been working on quinone-based electron bifurcation (QBEB) in bc1 and b6f complexes for more than 20 years and more recently also started to investigate this mechanism performed by flavin-containing enzymes, which is an emergent research subject with the first examples reported only a little over 10 years ago (10.1128/JB.01422-07; 10.1128/JB.01417-07).

The electron bifurcating hydrogenase (HydABC) from Thermotoga maritimais a multi-centre protein complex containing flavin molecules together with a number of [2Fe-2S]- and [4Fe-4S]-clusters the redox properties of which are not yet well characterized. However, it is the first case of its enzyme family for which a high resolution cryoEM structure has been solved (10.7554/eLife.79361) and which therefore stands out by its strong potential for correlating structural and electrochemical parameters. It has been argued in the past that the ability to bifurcate electrons relies on the specific electrochemical properties of the redox centres forming the bifurcating unit, which, according to the recent structure of the Thermotoga enzyme, involves the flavin as well as one or two [2Fe-2S]- and one [4Fe-4S]-cluster.The collaboration project with the laboratory of James Birrell aims at determining the redox and pH-dependent properties of these centres. 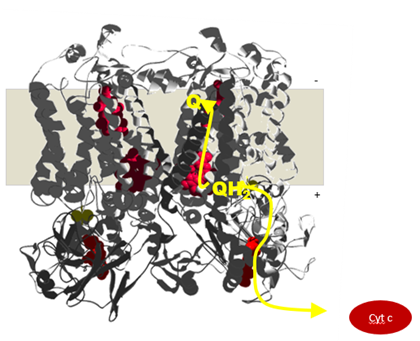 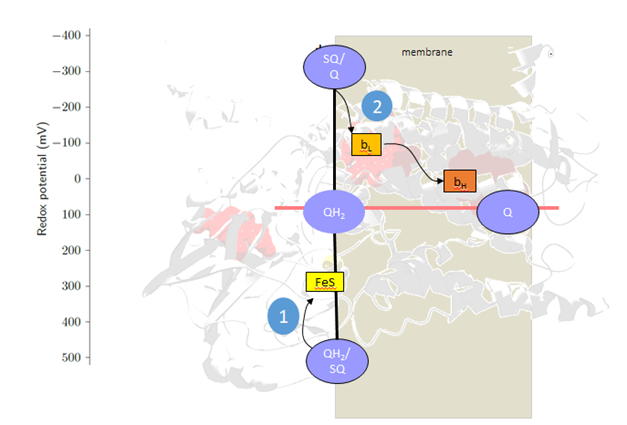 These reactions rely on a fine-tuned redox potentials of all co-factors: 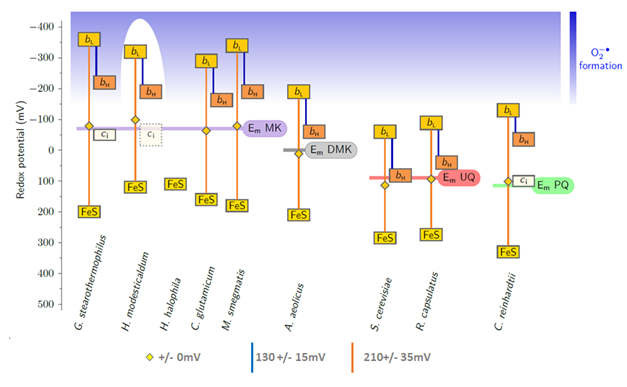 Note that the high redox midpoint potential of ubiquinones and plastoquinones, when compared to menaquinones allowed to take all the cofactros of the complex out of the redox range where reactions with oxygen occur. Only the Qo site semiquinone remains in the dangerous zone.

The modularity of proteins in various bioenergetic chains is of ongoing interest ever since the group was founded. By combining biochemical evidence and phylogenetical analysis we are able to trace back common ancestors and identify patterns that trace back to the protein make-up of the last universal common ancestor (LUCA).

On the Natural History of Flavin-Based Electron Bifurcation

On the universal core of bioenergetics

Reactive minerals and the emergence of life

Our group seeks to understand the evolution of di-iron enzyme reaction centers as found in soluble methane monoxygenase (sMMO) or carbon monoxide dehydrogenase (CODH), and their analgous structural counterparts found in certain reactive naturally occuring minerals such as green rusts, mackinawite, and gregite. Insight into how abiotic geochemical pathways can replicate primative metabolic pathways and self-organize into structures condusive for the continuous production of organic precursors can help us understand how life began it’s inevitable journey to being.

Fougerite: The not so simple progenitor of the first cells

The energy substrates used by prokaryotes are extremely diverse and even include substances that are toxic to most organisms. Among them, Arsenic is emerging as a major bioenergetic microbial substrate used since Archean times.  Our research objective is not only to understand the place of Arsenic metabolism in the global evolution of energetic processes and life on earth, but also to unravel the still numerous mysteries of the molecular mechanisms of the functioning of the enzymes involved in the bioenergetic metabolism of Arsenic: arsenite oxidase Aio, alternative arsenite oxidase Arx and arsenate reductase Arr. These questions are addressed according to the specificity of our BIP09 team, i.e. the phylogenetic approach combined with biochemistry (enzymology, purifications), biophysics (optical and EPR spectroscopies) and microbiology.

Arsenic metabolism has even long been proposed as ancient. Arsenic is in fact frequently found in significant concentrations in the vicinity of hot springs, which are considered to mimic the conditions that led to the appearance of life on earth. This hypothesis is now reinforced by experimental paleo-geological data ( 10.1038/ngeo2276). The archaean palaeogeochemical period being anaerobic, the dominant chemical species of arsenic was reduced to arsenite (AsIII). The question is which enzyme may have been responsible for the conversion of this AsIII in the Achean. Two enzymes are known today as being able to oxidize AsIII. The first, arsenite oxidase (Aio; formerly known as Aro, Aso or Aox) is a periplasmic, heterodimeric enzyme with a subunit carrying a Mo-bis-PGD cofactor and a subunit carrying a [2Fe-2S] center called Rieske » (by homology to the Rieske/b complex, see 10.1098/rstb.2002.1184). The phylogeny of the two subunits of Aio, constantly reinforced by new sequences, shows a clear cleavage between Archean and bacterial protein sequences of Aio which suggests that this enzyme was already present in LUCA (10.1093/molbev/msg071, 10.1186/1471-2148-8-206, 10.1016/j.tibs.2008.10.005, 10.1016/j.bbabio.2012.08.007), thus reinforcing the hypothesis of the ancestrality of this enzyme.

Despite the resolution of Aio’s structures, the question of how the enzyme works has not yet been resolved. Our hypothesis is that the two electrons from the MoIV formed during the oxidation of AsIII are transferred simultaneously to the two [FeS] centers during an electron bifurcation mechanism. This hypothesis is compatible with the internal electron transfer kinetics measured on the wild type enzyme and the redox properties of the enzyme (10.1016/j.bbabio.2017.08.003, 10.1016/j.bbabio.2016.05.003). We are, however, currently testing this hypothesis by characterizing mutants of the enzyme.

Characterization of several representatives of the enzyme revealed that the Aio from proteobacteria (10.1074/jbc.M110.113761 )constitute two distinct enzyme groups in terms of redox partner specificity. One reacts with horse heart cytochrome, while the other is unable of doing so, but reacts for example with Aquifex aeolicus cytochrome c555 or Azurin. Analyses of surface electrostatic potentials of enzymes and electronic carriers suggest that it is the electrostatic compatibility between enzyme and electronic carrier that is at the origin of the specificities observed. For example, Azurin and the cytochrome c555 of Aquifex aeolicus react with the Aio from A. faecalis and not that from NT-26. The reverse is also true for horse heart cytochrome.

The second enzyme known to oxidize AsIII is the alternative arsenite oxidase Arx. This enzyme is a very close homologue of the arsenate (AsV) reductase Arr. Arr is a heterotrimeric enzyme also with Mo-bis-PGD cofactor, which functions as a terminal reductase using AsV as an electron acceptor, drawing its electrons from a pool of membrane quinones through the operation of its membrane subunit. By combining phylogenetics of arr/arx genes, enzymology and microbiology, our work suggests that Arx and Arr have recently evolved in the living world and that Arx has been very poorly distributed (10.1186/1471-2148-8-206, 10.1126/science.1164967, 10.1016/j.bbabio.2012.08.007; 10.1016/j.bbabio.2020.148252). Our interpretation of this phylogeny is that only after the diversification of Archaea and Bacteria, O2 levels induced an accumulation of the oxidized form of Arsenic, AsV, leading to the appearance of Arr in bacteria. Thermodynamic considerations, confirmed by experimental data, suggest that Arr reduces AsV by oxidizing menaquinones (MK, quinones of relatively low redox potential), as in the Shewanella ANA-3 bacterium, while Arx reduces ubiquinone by oxidizing AsIII (10.1016/j.bbabio.2020.148252). This hypothesis is consistent with the distribution of quinones in the tree of life. According to the phylogeny of the enzymes at Mo, the enzymes Arx and Arr seem to have evolved from an ancestral enzyme involved in sulphur metabolism (10.1016/j.bbabio.2020.148279).

The first question addressed on this family of enzymes is the diversity of their catalytic capacity, which is without any equivalence in the enzymatic world. Despite 30 years of research, the question of the structural determinants behind the catalytic properties of these enzymes has not been resolved.  The question is addressed in the team, using the phylogenetic approach, in two groups of Mo-enzymes. The aim is to determine the amino acids responsible for the enzymatic specificities by bioinformatic analysis (structure and multiple sequence alignment) of the enzymes (description of the approach in 10.1039/9781782623915-00143). The sub-family we are currently working on is the Psr/Phs-Ttr-Arr/Arx group, comprising enzymes capable of converting arsenic and others capable of converting sulphur.

The adaptation of Mo enzymes to their substrate is also correlated with the adaptation of the redox properties of its Mo-bis-PGD cofactor. Here again, the questions of the structural origin of the redox plasticity of this center remain unanswered. Analyzing the structure of Aio and other Mo-enzymes, stabilizing a MoV or not state, suggested the crucial role of the hydrogen bond network around Mo and particularly with nitrogen 5 of one of the two pterins at the origin of the redox properties of the cofactor (10.1016/j.bbabio.2016.05.003). We are currently testing this hypothesis with the Thermus thermophilus sulphite dehydrogenase.

We study selected prokaryotic energy conserving chains with the aim of contributing to a comprehensive picture of the diversity of these chains but also of elaborating common features and conserved principles.

The ultimate goal of this approach is to contribute to the elucidation of the origin(s) and evolutionary pathways of biological energy conversion.

All processes in living cells are energy-dependent. Apart from the comparatively inefficient fermentation pathway, this energy is invariably provided by the « Mitchellian » chemiosmotic mechanism, that is, by the conversion of a proton-motive-force (pmf) across a « bioenergetic membrane » into ATP-synthesis via the enzyme ATPase.
In the vast majority of cases, the pmf is produced by the coupling of electron transport to the vectorial translocation of positively charged ions (generally protons, H+) across the bioenergetic membrane (Figure 1). In a few archaeal species, the bioenergetic membrane potential is alternatively built up directly by light-driven ion-translocation performed by the enzyme Bacteriorhodopsin.

Life thus mainly draws its energy from collapsing electrochemical disequilibria of redox-active substrates. Such disequilibria may be provided by geo-/biochemical processes in the environment or induced by life itself via photochemical mechanisms (i.e. chlorophyll-based photosynthesis).
In eukaryotes, the corresponding electron transfer chains are almost invariably aerobic respiration (in mitochondria) or oxygenic photosynthesis (in chloroplasts). Prokaryotes, by contrast, feature a bewildering diversity of bioenergetic electron transfer chains and are probably able to use all bio-available redox compounds as substrates for energy conversion, either as reductants or oxidants. Figure 2 represents a few selected examples of this -probably far from exhaustively known- diversity of prokaryotic electron transfer chains.

BIP09 studies selected prokaryotic energy conserving chains with the aim of contributing to a comprehensive picture of the diversity of these chains but also of elaborating common features and conserved principles. The ultimate goal of this approach is to contribute to the elucidation of the origin(s) and evolutionary pathways of biological energy conversion